Forgotten Heroes A to Z: Cat-Man and Kitten 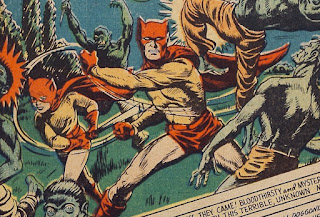 Cat-man, like the previously discussed Black Owl, was obviously another golden age hero highly influenced by the success of the DC (then National Comics) character Batman. Like Batman, Cat-Man had murdered parents, a kid sidekick and an animal influenced motif. Unlike Batman, Cat-Man had some super powers, was not wealthy and his kid sidekick was a young girl. Cat-Man was created by artist Irwin Hansen and an unknown writer for Holyoke Comics. After first appearing in Crash Comics #4, cover dated Sept. 1940, he then headed 33 issues of his own title. Like many other golden age characters not published by DC or Timely (later Marvel), Cat-Man and Kitten fell into the public domain. From there, they have appeared in various other publishers, including AC Comics and Dynamite’s Project Superpowers.

Summary: Young David Merryweather, on a trip with his family in the jungles of Burma, was the only survivor of an attack by bandits. He was cared for by a tigress, and acquired the skills and strength of the great cat. After returning to America as an adult, he used his powers to fight crime. Shortly after becoming Cat-Man, he rescued a young girl from her con artist uncle and adopted her. Katie Conn became Kitten, and was a skilled acrobat and fighter in her own right.

His powers included the ability to climb and leap, see in the dark and recover from damage as if he truly had nine lives. 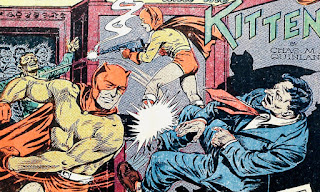 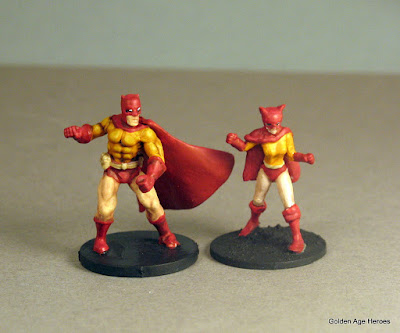 To make a miniature of Cat-Man and Kitten, I started with the most obvious Heroclix, DC's Catman. This 1960s villain was clearly inspired in costuming by the original Cat-Man, so a minor repaint was all this required. Kitten began as a Wondergirl figure that I gave a mask and cape from greenstuff putty. To stat them out for Pulp Alley, I invented a new ability, "Climb." It's one of a few house rules I've created to get some early superheroes into PA. It probably should be a level one ability, since it is less powerful than "Winged" or "Speedy" which are both also first level abilities.