I'll admit that I was struggling to find a good Golden Age comic character for my "E" entry, which delayed my posts. Fox Feature's Eagle was my first choice but I could not find a good mini for conversion.

So instead, I'm stuck with the Enchanted Dagger. Enchanted Dagger made a few appearances in 1941 and has pretty much disappeared. A hero named for his weapon is not a bad thing, necessarily. There’s a great tradition there: Green Lantern, Green Arrow, Katana and many more. But Enchanted Dagger?

According to the Public Domain Super Heroes fandom page, the Enchanted Dagger was created by comic legend George Tuska. The character’s first appearance was in Yankee Comics #1 (cover dated September 1941) and ran all four issues that title. Chesler was a small publisher, sometimes just a studio that packaged comics for bigger publishers , and its titles never ran for very long. Other than a handful of reprints, that was it for the Enchanted Dagger.

Still, in four appearances, he managed to have three different costumes. In his origin story, he wore a red tunic and yellow tights. In the third issue, he wore a green body suit and domino mask not unlike the Riddler. In his last appearance, the suit’s color changed to red. 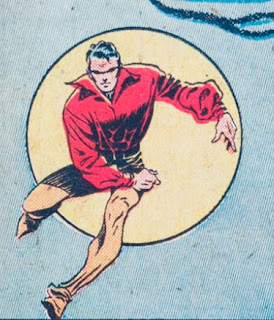 The Enchanted Dagger miniature started out as a Nightwing Heroclix. The red costume was the easiest to produce. A little trimming of the gloves and boots  and turning his fighting stick into a dagger was all this conversion required. In the future, I’ll do a post on how I strip the paint on Heroclix. One word answer: acetone. 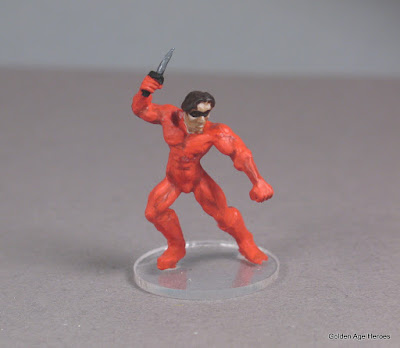 The Enchanted Dagger certainly has a unique origin story. Roger Chalmer's father Harry once saved the life of an African chieftain. He promised to give Harry a magic dagger one day but Harry never returned. Years later, his son Roger did, and as luck would have it, he arrived in time to help the chieftain fight an enemy tribe. Roger was given the magic dagger, which can paralyze enemies, force them to tell the truth and cannot be used against its true owner.


Enchanted Dagger at the Digital Comics Museum
at January 24, 2019